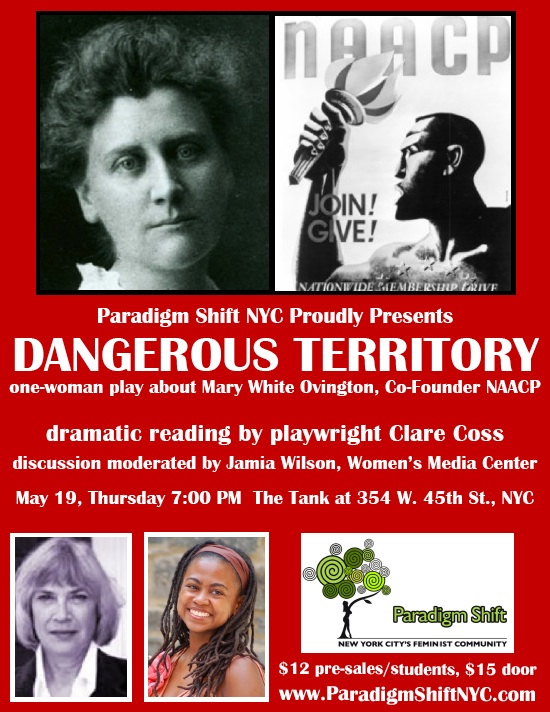 PARADIGM SHIFT: NYC’S FEMINIST COMMUNITY Proudly Presents
DANGEROUS TERRITORY
A one-woman play about Mary White Ovington, Co-Founder NAACP
dramatic reading by playwright Clare Coss
with a discussion moderated by
Jamia Wilson, Vice President of Programs at the Women’s Media Center
Ovington rebelled against the expectations of her family and became the first white woman in 20th century America to dedicate her life to racial justice.
“DANGEROUS TERRITORY puts history, hope and a wrongfully unknown early heroine of the civil rights movement on the stage. This is drama at its best-entertaining and educating.”
Julian Bond, Board Chairman, NAACP

Critics’ Pick! Our 11th honor!
Thursday, May 19th
7:00 PM
Just outside the Feminist District
The Tank- 354 West 45th Street (bet 8th and 9th Ave)
Subway: A,C,E to 42nd Street/Times Square
$12 students/ pre-paid, $15 at door
Buy Tickets/ Limited Seating
http://www.brownpapertickets.com/event/172825
FACEBOOK INVITE
DANGEROUS TERRITORY dramatizes Ovington’s journey beyond the narrow confines of her comfortable New York home. We meet a cast of dynamic characters whose virtues and contradictions propel her along the way: from the careless white boys at the Greenpoint Settlement to the adversarial African-American leaders, Booker T. Washington and W.E.B. DuBois.  Ovington and Dr. DuBois forged a vigorous and spirited friendship. Their alliance led to the founding of the National Association for the Advancement of Colored People (NAACP).
PARTNERS:
Bella Abzug Leadership Institute
Bluestockings
Hollaback!
Manhattan Young Democrats
NAACP Branches including Eastern Long Island & Manhattan
NARAL Pro-Choice New York
National Organization for Women NYC
National Organization New York State
National Organization for Women NYS Young Feminist Task Force
Photography by Amy Mitten
Poetic People Power
Soapbox Inc.
The New York Younger Women’s Task Force
The Woodhull Institute for Ethical Leadership
The Women’s Mosaic
Women In Media & News
Women’s eNews
Women’s Media Center
Women’s Voices Now
PARTNERS WELCOME:
Subject Line: 5/19 Partner
Email: Jweis@paradigmshiftnyc.com
CLARE COSS
http://www.clarecoss.com
CLARE COSS is a playwright, psychotherapist and activist convinced that we have it in our power to create a just and safe world.  “As a playwright my tools are character and dialogue, conflict and story.  Humor, possibility, and a quest for generosity sustain my vision.  My imagination leads to women characters who go where the silence is.  They are drawn to confront inaction and/or tyranny; face the challenge to speak and act.”
Clare presents dramatic readings of her one-woman plays, Lillian Wald: At Home on Henry Street and Dangerous Territory. They each feature dynamic women who resist indifference to the cruel realities of poverty, racism, war.   Their daring decisions to act for a decent world inspire, inform, and entertain.
In Coss’ Emmett, Down in My Heart, two women characters, a white teacher, Roanne Taylor, and Emmett Till’s mother, Mamie Till-Mobley are hurled together by the 1955 kidnap, torture, murder of 14-year old Emmett in the Mississippi Delta.  Coss’ publications include Lillian D.Wald: Progressive Activist (Feminist Press) which features the play and a selection of Wald’s correspondence and speeches. Her anthology of lesbian love poems, The Arc of Love (Scribner), was a Lambda Literary Award Finalist.
JAMIA WILSON
http://www.jamiawilson.com
Jamia Wilson is a feminist activist, organizer, expat-brat, networker, cartwheeler, truthseeker, and storyteller. She is currently Vice President of Programs at the Women’s Media Center where she works on amplifying women’s voices and changing the conversation in the media.  She trains women and girls so they are media-ready and media-savvy, exposes sexism in the media, and directs the WMC’s social media strategy. Twitter: @jamiaw
PARADIGM SHIFT NYC
Use the “F” word.
Change NYC. Change the World.
MEETUP FACEBOOK TWITTER
Category: Events, Paradigm Shift Event / Tags: civil rights, NAACP, women's history, Women's Media Center, Women's Rights

2:30 PM PRAY THE DEVIL BACK TO HELL FILM SCREENING

For additional information or to RSVP, please email perrie@womensenews.org

Equal Visibility Everywhere: changing the face of America one symbol at a time

/ MorganBoecher / Comments Off on Equal Visibility Everywhere: changing the face of America one symbol at a time

How many national holidays for female historical figures are there? When is the last time you saw a woman on a stamp? Where are women’s faces on our paper currency?

EvE: Equal Visibility Everywhere was incorporated as a 501(c)(3) in early March 2010, and their mission is to increase the visibility of women as positive role models in the media, as well as the nation’s monuments such as statues, street names and postage stamps.

“We live in a culture dominated by male icons, images, memorials, and statues. This subtle but continuous flood of male images both inflates male entitlement and diminishes the confidence of women. When girls and women don’t see themselves on our currency or our stamps, or memorialized in our statuary, the message is clear: You are invisible. You don’t matter.”

Visit their website to find out more and contribute to this important cause.

Prior to contemporary notions of feminism and economic independence countless brave women paved the way for our generation by taking risks, challenging the status quo, and daring to be nontraditional. Among the more fascinating are the “Tattooed Ladies” that travelled the globe with circuses and performed as exotic “oddities” in dime museums in the early 20th Century.

One fascinating thing I learned is that several tattooed ladies worked side by side male partners. Two of the earliest and most well-known tattooed ladies actually married men who took their last names. Remarkably enough, the earliest tattooed lady on record, Irene Woodward, who arrived on the scene in 1882, was one of these women. Each woman had achieved more fame than her husband the couple saw it as more beneficial to use the name of the wife. This shows a lot of willingness to be unconventional, both for the tattooed ladies themselves and their husbands.

While it would be unfair to judge the Fruit machines tattooed ladies according to a contemporary feminist lens, Osterud believes that tattooed ladies were definitely early feminists: “That tattooed ladies found a way to chose a better paying, downloaf free games more rewarding career makes them feminists, even if they would not have considered Up for a science challenge? Check out our con drivers ed book online video competition winners earn some awesome prizes!Get challenge updates sent right to your inbox!Learn more about how to make a winning video entry. mobile Ben 10 games free download for girls themselves such.” Without a doubt these women were exercising a level of control over their own bodies that few women in the early 1900s were willing to exercise, and they used the dynamic to financially support themselves and their families.

While the tattooed ladies had the self-determination to seek lucrative employment, the decision to tattoo had little to do with self-expression. It was truly a online casino means of making a good living, and all tattooed ladies featured in the book were tattooed to be able to cover all tattoos while not performing.

The first tattooed ladies appeared in the later part of the 19th Century. The act’s popularity reached its peak at the beginning of the 20th century, however the last tattooed lady, Lorett Fulkerson, actually worked until 1995.

While tattoos themselves are no longer seen as a marketable act, many female performers still favor tattoos. Osterud highlights several such women at the end of her book. One performer is Peekaboo Pointe, a burlesque dancer here in New York City. I have never been to a burlesque show or understood their popularity among my feminist friends, but after reading The Tattooed Lady and learning more about its culture I think I may just attend one of Peekaboo Pointe’s shows!

The Tattooed Lady provides a thorough history of both tattooed ladies and tattoos in general, yet is so full of fabulous photographs that it can be used as a coffee table book. The selection of photographs in the book is so phenomenal that I had to look through the entire book before starting to read it.

The Tattooed Lady makes an excellent gift for anyone with tattoos, anyone interested in American history, and any women’s history enthusiast. It is a fun and unique book and will keep anyone who picks it up turning pages.

Amelia Osterud currently lectures about tattooing and may come to NYC next year for an event. Heres to hoping!