Paradigm Shift NYC Presents “HOW TO LOSE YOUR VIRGINITY” Screening & Discussion with Therese Shechter, Filmmaker of “I Was A Teenage Feminist”, Abiola Abrams, Author

/ meredith / Comments Off on Paradigm Shift NYC Presents “HOW TO LOSE YOUR VIRGINITY” Screening & Discussion with Therese Shechter, Filmmaker of “I Was A Teenage Feminist”, Abiola Abrams, Author 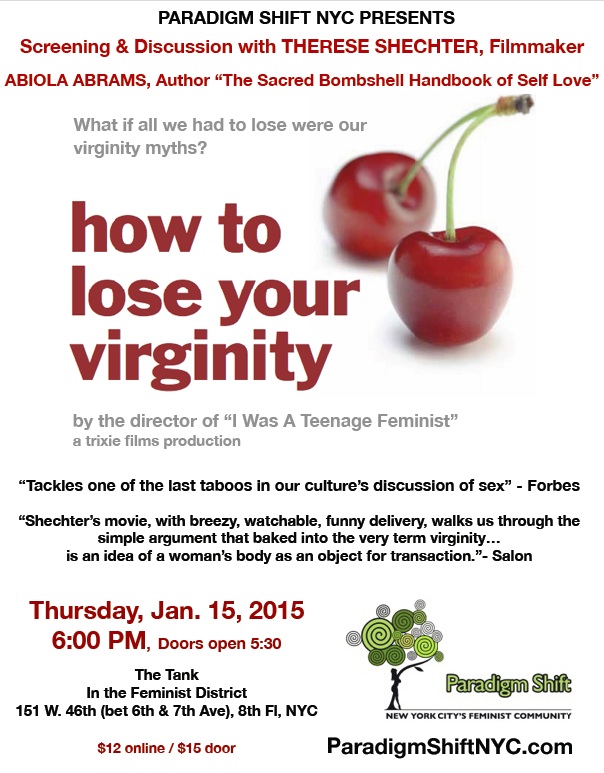 HOW TO LOSE YOUR VIRGINITY

What if all we had to lose were our virginity myths?
A trixie films production

This eye-opening and irreverent documentary explores why female virginity is still so valued in our hypersexualized society. Traveling through the worlds of religion, history, pop culture and $30 internet hymens, the film reveals the myths and misogyny behind a rite of passage that everyone thinks about but few truly understand.

Filmmaker Therese Shechter uses her own path out of virginity to explore why our sex-crazed society cherishes this so-called precious gift. Along the way, we meet sex educators, virginity auctioneers, abstinence advocates, and young men and women who bare their tales of doing it—or not doing it.

THERESE SHECHTER (Director/Producer/Writer) deftly fuses humor-spiked, personal narrative with grass roots activism and new media, most recently as the writer and director of the 2013 documentary HOW TO LOSE YOUR VIRGINITY. The film has appeared on television and in film festivals in the US and all over the world. She also curates the film’s online interactive project, THE V-CARD DIARIES, a crowed-sourced collection of over 200 stories of ‘sexual debuts and deferrals’ which was recently on exhibit at The Kinsey Institute.

Shechter was a panelist at Harvard’s “Rethinking VirginIty” conference, and frequently speaks at college campuses on virginity, feminism and sexuality. Her work has been covered by Elle, Salon, The Atlantic, Feministing, Forbes, The Guardian, The Jakarta Globe and CBC’s Q, among others. She herself has written for the Chicago Tribune, Talking Points Memo, Nerve and IndieWire’s Women & Hollywood.

Shechter’s first feature documentary, the award-winning I WAS A TEENAGE FEMINIST (2005), has screened from Stockholm to Delhi to Rio and at Serbia’s first-ever Women’s Film Festival. Her short documentary HOW I LEARNED TO SPEAK TURKISH (2006) won a Documentary Jury Prize at the Atlanta Film Festival, and her short film #SLUTWALKNYC premiered at the Hampton’s International Film Festival in 2013.

Abiola Abrams, the author of the award-winning “Sacred Bombshell Handbook of Self-Love,” is known for giving bold and empowering advice on networks from MTV to the Discovery Channel. In addition to being an in-demand inspirational speaker, transformational coach, multi-platform author, and ESSENCE advice columnist, Abiola writes and broadcasts about the heart-centered lifestyle, reclaiming your personal power, and answering your calling.

Whether you call her America’s Self-Love Coach, the Midwife for Your Inner Life, or a modern day conjure woman, it’s time to become who we were born to be, and Abiola has the tools to help us get there. Our mothers had Dear Abby and we have Dear Abiola. She’s the Olivia Pope of your personal life. Consider it handled with her personal power process that breaks through fear and the inner voices that keep us playing small.