/ shireensaxena / Comments Off on December 17: International Day to End Violence Against Sex Workers 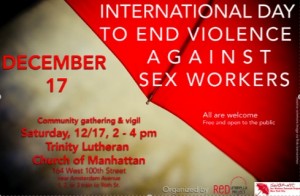 On December 17, International Day to End Violence Against Sex Workers Marks One Year Since Bodies Discovered on Gilgo Beach

WHO: Organized by sex worker support and advocacy groups the Red Umbrella Project and the Sex Workers Outreach Project New York. Attendees will be people currently or formerly involved in the sex trades and our friends, family, allies, and those concerned for our health and safety.

In December 2010, the bodies of four women, later identified as Amber Lynn Costello, Megan Waterman, Melissa Barthelemy, and Maureen Brainard-Barnes were discovered on Gilgo Beach in Long Island, after the family of missing woman Shannan Gilbert insisted on a police investigation of her disappearance. The cases remain unsolved, and since December the remains of another six people have been discovered in the area. The Suffolk County Police Department, which is responsible for the investigation, believes that it is likely that there are multiple local killers who are preying on people who sell sexual services.

On December 17, 2011 people in the sex trade and the people who love and support us will gather at Trinity Lutheran Church of Manhattan from 2 to 4 pm to hold a vigil for the victims of the Long Island killers and the many other people killed every year because they trade sex and are vulnerable to violence. The event will feature community activist speakers, a candle lighting, and a reading of the names of people in the sex trade who have been murdered this year.

The International Day to End Violence Against Sex Workers was first organized nearly a decade ago by sex workers in San Francisco to memorialize the people murdered by serial killer Gary Ridgway. Ridgway captured the attitude that cultivates violence towards sex workers: “I picked prostitutes because I thought I could kill as many of them as I wanted without getting caught.” At the event, we create a space that challenges this assumption by demonstrating that we have a caring community.