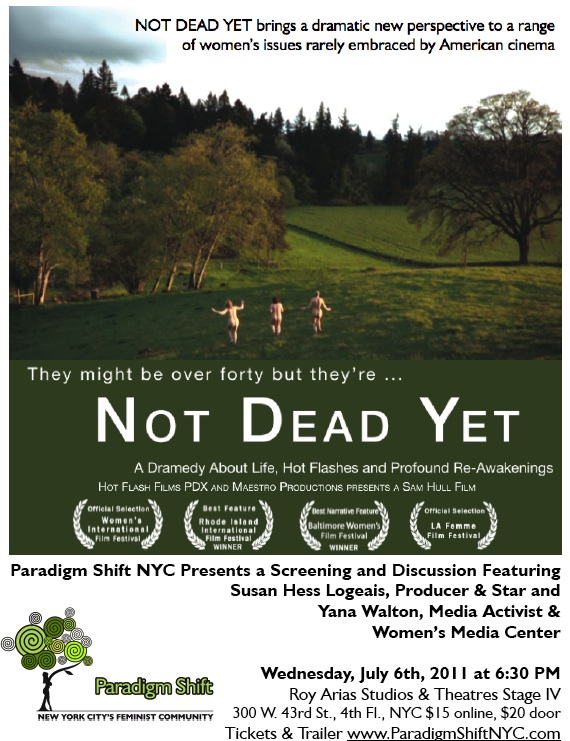 NOT DEAD YET brings a dramatic new perspective to a range of women’s issues rarely embraced by American cinema.

Three women join forces to revive their acting careers, only to find themselves on a quest for something far more important.  Frustrated by the lack of roles for women over 40, they decide to create their own film, starring themselves.  As the project spins out of control, so do their lives.

PARTNERS INCLUDE:
Amy Mitten Photography
Bella Abzug Leadership Institute * Body Typed: 3 Films on Physical Perfection and JesseDocs.com
Clare Coss, Playwright & Activist * Gloria Feldt, Author & Activist
Manhattan Young Democrats * Motherhood Later…Than Sooner
NARAL Pro-Choice New York * National Council of Jewish Women New York
National Organization for Women NYC * National Organization for Women New York State
National Organization for Women NYS Young Feminist Task Force
New York Women In Film & Television * NY Activist Calendar
Poetic People Power * Trixie Films * The Feminist Press
The Woodhull Institute for Ethical Leadership * The Women’s Mosaic
WAM! NYC * Women In Media and News
Women’s Media Center * Women’s eNews
PARTNERS WELCOME:  Join as a supporting organization.  Subject Line: 7/6/11 Partner
Email: Meredith@paradigmshiftnyc.com
SUSAN HESS LOGEAIS
http://www.notdeadyetthefilm.com
Prior to leaving the entertainment industry in 1990, Logeais had accomplished in 15 years what few people achieve in a lifetime. Beginning at the age of 17, the classically-trained ballerina spent a year performing with the Santa Francisco Ballet under Artistic Director Michael Smuin.
Then, in 1978, the teen began a seven-year stint during which she graced over a dozen magazine covers.  In 1984, Logeais scaled back her modeling to pursue her passion: acting. During the years that followed, she co-starred in four network television movies, a Sidney Sheldon mini-series for CBS, and episodes of “Miami Vice,” “Knightwatch,” “Spencer: For Hire,” and “Christine Cromwell.”
Finally, after years of being in front of audiences and the camera, Logeais decided to step behind the lens, and began learning the craft of screenplay writing. At the same time, she formed her own production company, Two Chicks with Cameras, and co-directed and produced a series of short films.
Then in 1992, her body rejected the breast implants she had gotten 8 ½ years earlier. Realizing how she had unwittingly inspired other women to follow her example, she convinced Allure magazine to chronicle her surgery and recovery. In addition, she appeared on a local LA television program to share her story.
Teaming up with local talent and crew, she produced her screenplay “Not Dead Yet”.  Her goal in producing the film was threefold; to see one of her screenplays produced; to star in a feature film; and to produce a story that would encourage women over 40 to embrace themselves and the wisdom their age represents.
“Not Dead Yet” was completed in early 2009 and has since screened at numerous film festivals, winning Best Feature at the Rhode Island International Film Festival and at the Baltimore Women’s Film Festival.  Subsequent projects include a short documentary entitled “Nerves of Steel, a year with The Portland Ballet,” which she recently completed; “Clay In Their Hands,” a documentary focusing on the importance of valuing women and children that is in production; and “The Emerald Tree,” an illustrated short story that is in development.
YANA WALTON, MEDIA ACTIVIST
Yana Walton is the former vice president of communications for the Women’s Media Center, an organization working to make women visible and powerful in the media. A media activist with a background in U.S. women’s and LGBT American history, Yana was previously the Southern Media Field Strategist at GLAAD, where she was responsible for monitoring and responding to media, training activists and coordinating media campaigns in 12 Southern states. During the 2008 election, Yana provided media training for activists after the passage of Proposition 8 in California, worked on op-ed campaigns in Florida for the “No on 2” marriage ballot initiative and tenth observance of Matthew Shepard’s murder.
Yana was also the director of communications for the Utah Pride Center, where she trained newsrooms on fair, accurate and inclusive reporting on LGBT people and issues, was the spokesperson for the Utah Pride Festival, and worked on transgender-inclusive housing policies for state universities. She also ran the statewide outreach and volunteer program for Planned Parenthood Association of Utah, where she focused on providing testing outreach and comprehensive sex education, and created a peer-education teen council.
Yana was the research assistant for Dr. Elizabeth Clement’s upcoming history of gay family in 20th century America, We Are Family: Lesbians, Gays, and the American Family. Yana resides in Brooklyn, where she co-organizes the Brooklyn Skillshare in her spare time, an annual learning event offering free classes taught by residents, for residents.
Category: Events, Paradigm Shift Event /