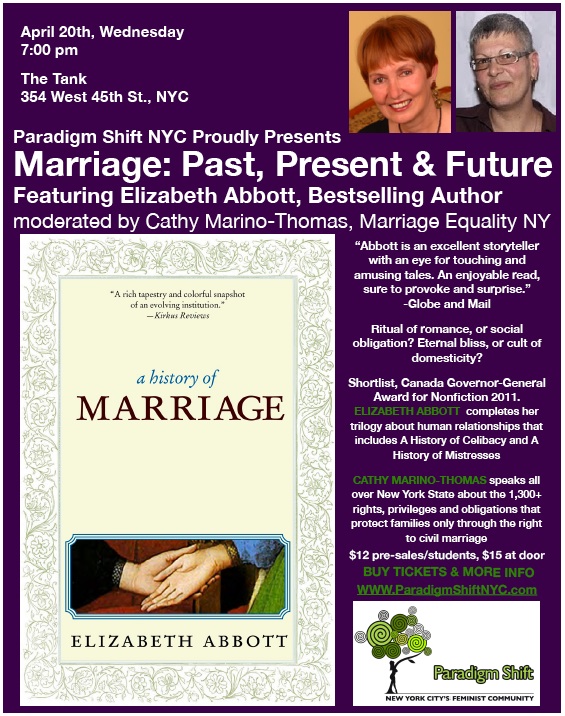 A HISTORY OF MARRIAGE

Shortlist, Canada Governor-General Award for Nonfiction 2011
What does the “tradition of marriage” really look like? Elizabeth Abbott paints an often surprising picture of this most public, yet most intimate, institution. Ritual of romance, or social obligation? Eternal bliss, or cult of domesticity? Abbott reveals a complex tradition that includes same-sex unions, arranged marriages, dowries, self-marriages, and child brides. Marriage- in all its loving, unloving, decadent, and impoverished manifestations- is revealed here through Abbott’s infectious curiosity.

“Abbott is an excellent storyteller with an eye for touching and amusing tales. An enjoyable read, sure to provoke and surprise.”
—Globe and Mail

ELIZABETH ABBOTT, AUTHOR
Elizabeth Abbott is a writer and historian with a special interest in women’s issues, social justice for all and sugarcane-cutters in particular, the treatment and lives of animals, and the environment. She has a doctorate from McGill University in 19th century history. Before moving to Toronto, she lived in Montreal and Port-au-Prince. She is the author of several books, her most recent, A History of Marriage, completes her trilogy about human relationships that includes A History of Celibacy and A History of Mistresses. Her previous book, Sugar: A Bittersweet History, inspired by her Antiguan heritage, was short-listed for the Charles Taylor Prize for Literary Non-Fiction.

Elizabeth is a Senior Research Associate at Trinity College, University of Toronto and, from 1991 to 2004, was Dean of Women. She served for several years on the Editorial Board of the Canadian Human Rights Foundation and the Rights and Freedoms Committee of The Writers’ Union of Canada. The Riverdale Historical Society, which she co-founded in 1999, won the 2007 Heritage Toronto Community Heritage Award and the Members’ Choice Award.

CATHY MARINO-THOMAS, BOARD PRESIDENT, MARRIAGE EQUALITY NY
Cathy speaks all over New York State about the 1,300+ rights, privileges and obligations that protect families only through the right to civil marriage. Prior to working with Marriage Equality New York, Cathy spent many years as a Buddy in the Gay Men’s Health Crisis (GMHC) Buddy Program visiting countless people afflicted with HIV/AIDS and assisting them with daily chores, advocacy and information. An out lesbian since 1978, Cathy lives with her wife, Sheila and daughter Jacqueline.