The Right to Breathe: A Guest Post by Carly Anger

/ MichelleGonzalez / Comments Off on The Right to Breathe: A Guest Post by Carly Anger

Gender inequality in advertising is certainly not a new topic. As an instructor, part of my job is to make sure that my students leave my classroom as better analytical thinkers; one way we do this is through studying the advertisements that they see everyday. My students seem receptive to discussing the damaging way in which media represents a “norm” of how men and women should act and look. 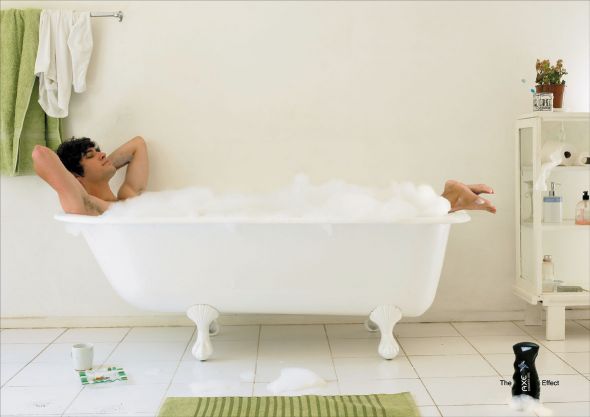 As I was looking for interesting ads to share with my students, I found this ad from Axe, a product from Unilever. The Axe commercials, which usually feature a man with an admiring group of scantily clad women fawning over him because he has just used the product, are at best mildly amusing (I begrudgingly admit) and are at worst dangerous for women everywhere in that they suggest woman are just objects to obtain. However, this ad is different from the other Axe ads and even different from ads that can be considered more offensive than the previously mentioned commercials.

This specific ad, which shows a woman face down in a bathtub full of water, apparently providing sexual pleasure for a man, does not have the right to a face, the right to an identity, or even the right to breathe. The ad is certainly harmful to women, but it also speaks out against sexuality. The man, with what can be interpreted as an entitled look on his face, is not even touching the drowning woman.

I have brought this ad to the attention of several students, friends, family members, and colleagues, many of whom did not share my same concerns. Some found my reference to “drowning” a stretch, pointed out that the woman is “voluntarily engaged” and suggested that I look at the ad with a less literal lens. Perhaps. However, if she is not physically drowning (though it is difficult to imagine that she is not, since after all, she has no access to air), she is certainly metaphorically drowning; she is submerged into an abyss where here identity is meaningless. When not taken “literally” and instead taken “metaphorically,”the results are no better.

The only thing that is missing in order to make the ad the absolute epitome of problematic advertising is a sponge in one of her hands so that she can simultaneously please the man and wash the tub. The advertisement, and many others, is scary in its cavalier attitude about the rights of women. It becomes “normal” for women to be perpetually cleaning and perpetually taking care of others, even at her own expense, or in this case life.

The intelligence of the ad makers and their decision to represent women in this manner is reflected in the bathtub itself. A critical thinker is not only left questioning how a woman could be treated in this brutal manner, but also how the bathtub became full without a faucet.

If this ad has upset you please let them know:
http://www.theaxeeffect.com/contact.html

Carly Anger is an instructor and PhD candidate at Marquette University in Milwaukee, Wisconsin. The subject of her dissertation is American coming-of-age novels with female protagonists published in the 1940’s. Any comments/concerns are welcome.