The Athena Film Festival: A Celebration of Women and Leadership

/ MichelleGonzalez / Comments Off on The Athena Film Festival: A Celebration of Women and Leadership 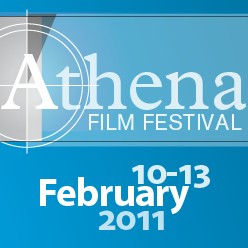 The Athena Film Festival:  A Celebration of Women and Leadership, announces its 2011 lineup of narrative and documentary films.

Straight from the Sundance Film Festival, the New York City premiere of Miss Representation, a film about the media’s disparaging portrayals of women, punctuated by candid interviews with Katie Couric, Nancy Pelosi, Rosario Dawson, Lisa Ling, Catherine Hardwicke, Geena Davis among many others.

Desert Flower, a film based on the bestselling book recounts the incredible journey of African refugee Waris Dirie who became a top international model.

The Festival is also proud to announce the U.S. premiere, in partnership with BBC Worldwide, of Mo, in which award-winning actress Julie Walters portrays Mo Mowlam, the charismatic woman whose no-nonsense approach to politics helped achieve one of the monumental landmarks in recent British history, the Good Friday Peace Agreement.

The festival will also present three shorts programs — including 12 features and documentaries all directed by women.

“We are extremely proud to announce the diverse slate of films we have selected for our inaugural season.  The films we’ll screen exemplify our mission—to bring women’s unique and powerful voice to the forefront,” said Kathryn Kolbert, co-founder of the Festival and director of the Athena Center for Leadership Studies at Barnard College.  “It is an honor for us to bring films with distinguished, creative and innovative visions and voices from all over the world, to our community,” said Melissa Silverstein, co-founder of the Festival and founder of Women and Hollywood.

Hosted by Barnard College and Women and Hollywood, the festival takes place February 10 -13, 2011.  Films will be shown on Barnard’s campus in Morningside Heights.  For All Access tickets or more information, visit www.athenafilmfestival.com.

The current lineup follows.  Additional screenings, panels and special events including the winners of the 2011 Athena Awards still to be announced.

Miss Representation explores how mainstream media contributes to the under-representation of women in power by promoting limited and often disparaging portrayals of women. Writer/Director Jennifer Siebel Newsom interviews some of America’s most influential thought leaders in politics, news, entertainment, and academia to reveal what lies beneath the media’s messaging. (Documentary)

Based on the novel by Waris Dirie and Cathleen Miller, Desert Flower recounts the incredible journey of an African refugee  who became a top international  model.  The book became a worldwide bestseller with more than 11 million copies sold.  (Narrative)

In the early 1970’s, Cathy Rush becomes the head basketball coach at a tiny, all-girls Catholic college. Though her team has no gym and no uniforms—and the school itself is in danger of being sold—Coach Rush looks to steer her girls to their first national championship. (Narrative)

This is the story of Ana, a first generation Mexican-American teenager on the verge of becoming a woman.   She realizes that leaving home to continue her education is essential to finding her place proudly in the world as an American and Chicana. (Narrative)

A riveting documentary about the recently assassinated Benazir Bhutto, a polarizing figure in the Muslim world. Following in her father’s footsteps, Bhutto was expected to dominate Pakistan’s 2008 elections, but her assassination sent Pakistan into turmoil. (Documentary)

In July 2002, 22 Palestinian and Israeli teenage girls traveled to the U.S. to participate in a women’s leadership program called Building Bridges for Peace. My So-Called Enemy is about six of the girls and how knowing their “enemies” as human beings complicates the next seven years of their lives. (Documentary)

Pink Smoke Over the Vatican is a documentary about impassioned Roman Catholic women who are defying the Church hierarchy by being illicitly ordained as priests and refusing to remain voiceless in the religion they love. (Documentary)

Pink Saris follows Sampat Pal Devi, the leader of the “Pink Gang,” who brings her own brand of justice to the streets of Uttar Pradesh, India, combating violence against women. (Documentary

The first historical documentary on Brooklyn Congresswoman Shirley Chisholm and her campaign to become the Democratic Party’s presidential nominee in 1972.  (Documentary)

Vision is a film about Hildegard von Bingen, a visionary in every sense of the word.  This famed 12th-century Benedictine nun was a Christian mystic, composer, philosopher, playwright, poet, naturalist, scientist, physician, herbalist and ecological activist. (Narrative)

Award-winning actress Julie Walters takes on the lead role in a revealing portrait of Mo Mowlam, the powerfully charismatic woman whose no-nonsense approach to politics helped achieve one of the monumental landmarks in recent British history, the Good Friday Agreement. (Narrative)

In 1998, 18-year old LaTraun Parker made a documentary about the difficulties of growing up in Harlem. Eights years later he was shot dead on the street. Today his mother Jean Corbett-Parker fights youth gun violence and helps other parents survive the pain through her organization, “Harlem Mothers.”

Hunger, loneliness and the will to survive push Fao to embark on a journey that will bring her face to face with her fears.

Theodora, grandmother of the filmmaker, recounts the story of her childhood in Greece during WWII. When fighting broke out in her homeland, she fled with her sisters and mother to the mountain village of Perista. There, they struggled to survive and outlast the war that Theodora would never forget.

A mother torn between being a good citizen and protecting her child discovers that both intervening and turning a blind eye can have negative consequences.

OUT OF INFAMY:  MICHI NISHIURA WEGLYN (Directed by Nancy Kapitanoff and Sharon Yamato)

Michi Nishiura Weglyn (1926-1999) was a noted civil rights activist who gave up a successful career as costume designer for the popular Perry Como Show to write the landmark book, Years of Infamy: The Untold Story of America’s Concentration Camps, which set the record straight about the incarceration of more than 120,000 Americans of Japanese descent during WWII.

The Delian Mode is an audio-visual exploration of the life and work of electronic music pioneer Delia Derbyshire. A collage of sound and image created in the spirit of Derbyshire’s experimental processes, this film illuminates her unique soundscapes onscreen while paying tribute to a woman whose work has influenced electronic musicians for decades.

A film about a young mother who will do anything, including endangering her own life, to ensure that the lights in her home stay on and her daughter is safe.

The experimental documentary explores the shifting terrain of gender identity.  “I wanted to be a boy when I got borned outta your tummy!” says Audrey, 6, who insists she’s Superman.  Playful and arresting, Audrey de-cloaks from Clark Kent to Superman, revealing her ‘secret identity’ as a boy.

Bismillah follows the beginnings of one Muslim woman’s groundbreaking struggle against America’s political structure. The film tells the story of Farheen Hakeem, a feisty 31-year- old Muslim Girl Scout troop leader who puts herself under public scrutiny by taking part in the consummate patriotic act—running for office.

POSTER GIRL is the story of Robynn Murray, an all-American high-school cheerleader turned “poster girl” for women in combat, distinguished by Army Magazine’s cover shot. Now home from Iraq, her tough-as-nails exterior begins to crack, leaving Robynn struggling with the debilitating effects of PTSD and the challenges of rebuilding her life.

Nyanwuor Duop’s fled her village along with thousands of other children. She walked for days from the Sudan to a refugee camp in Kenya.  She made it to the US.  In 2004, she was finally given asylum.  She spends time traveling around Texas advocating for Sudanese refugees and spreading awareness of the continuing situation in the Sudan. Nyanwuor dreams of one day returning to her country; to show her daughter the beautiful and peaceful Sudan where she was born.

ABOUT THE ATHENA CENTER

ABOUT WOMEN AND HOLLYWOOD

Women and Hollywood operates at the intersection of feminism and entertainment.  Since its inception in 2007 it has grown to be one of the most respected sites focused on women’s issues and popular culture, and its founder, Melissa Silverstein has become a well-respected commentator on the subject.

The idea was bold for its time. Founded in 1889, Barnard was the only college in New York City, and one of the few in the nation, where women could receive the same rigorous and challenging education available to men.  Today, Barnard is the most sought-after college for women and remains dedicated to the education of strong, independent-minded women who change the world and the way we think about it.

WANT FREE TICKETS TO SELECT SCREENINGS?  Go to the ticket site and plug in the code: ATHENA11