A Response to Ayaan Hirsi Ali

**In this blog, I use often use the terms “East” and “West” to refer to different geographic locations and groups of people.  Personally, I do not think this language is appropriate because it creates a binary and leads readers to make assumptions about the individuals in this group.  However, I chose to use this phrase because it was used by Hirsi Ali in the article to which I am responding.**

I often find myself sifting through the topics page of The New York Times online, looking for subjects which relate in someway or another to feminism; today, I clicked the link “women and girls.”  My eyes skimmed over the page and I immediately stopped at the second article, “Not the Child by Grandmother Wanted.” My interest was peaked, so I read the brief description: “What Western feminism can offer the child brides, battered wives and subjugated women of Asia and Africa.”  I could not help but think about Western imperialism, feminist exceptionalism, and the pervasive image of the West as the savior of women in the East.  Before I thought to check the author’s name, my mind started to wander.  Who would write this article?  Would they be a Western feminist or someone with a different background?  Regardless of all my questions, I knew one thing for sure.  I was already finding the piece problematic and had not even read the first sentence. 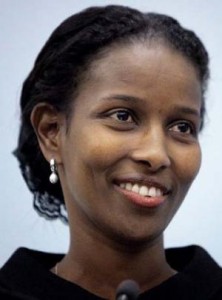 Perhaps I had simply overreacted to the description.  In hopes of proving myself wrong, I clicked on the link and read the article.  As soon as I realized that the piece was written by Ayaan Hirsi Ali, I knew my initial reactions were not wrong.  Hirsi Ali is a very controversial figure around the world for the books which she has published, her film Submission, and her public remarks against Islam.  She believes that Muslim women are oppressed and the source of these inequalities can be found in Islamic texts, specifically the Qu’Ran.  She also argues against multiculturalism and believes that the values of Western feminism need to be adopted globally.

Hirsi Ali begins the article with a story from her childhood.  When she was about six or seven years old, she had a conversation with her grandmother in which her grandmother equated a woman’s worth with “a piece of sheep fat in the sun.”  Her grandmother was constantly reminding her how she needed to behave in order to avoid being perceived as disobedient.  When Hirsi Ali asked why her brother did not have to act in the same way, her grandmother explained that her “misfortune is that [she was] born with a split between [her] legs.”

She goes on to tell the story of Nujood, a child bride from Yemen.  At eight years old, her father accepted a dowry of $750; in exchange, a delivery man received Nujood as his wife.  Nujood’s mother and sisters protested, but her father explained that this arrangement was completely normal.  Her husband physically and sexually abused her for nearly two years.  She borrowed money from her abut to pay for the bus fare to the courthouse, where she asked the judge for a divorce from her husband.  Her story made international headlines and “opened the doors” for changes in legislation and attitudes towards consent, sexuality, and marriage.

Hirsi Ali then offers a summary of Elizabeth Gilbert’s novel, Eat Pray Love.  She sees this story as an example of “what feminism has accomplished in the West.”  She says:

“I often am asked by my Western audiences: “Where did feminism go wrong?” I think the answer is staring us in the face. Western feminism hasn’t gone wrong at all — it has accomplished its mission so completely that a woman like Elizabeth Gilbert can marry freely and then leave her husband equally freely, purely in order to pursue her own culinary and religious inclinations. The victory of feminism allows women like Gilbert to shape their own destinies.”

First, Western feminism has yet to accomplish “its mission so completely.”  Western society is still deeply embedded in it’s racist, patriarchal, and classist roots.  Also, there is no denying that Western feminism has had its ups and downs.  For example, the first wave of feminism centered itself around suffrage.  However, the right to vote was not to be given to all women; rather, this fight was for the political advancement of white women.  Since then, the feminist movement has transformed and made great strides towards equality, but there is still plenty of work to be done.  Gilbert’s “freedom” to marry, divorce, and travel is not representative of the majority of Western women; her ability to do all of these things comes from a position of class privilege.  Although women in the West are legally guaranteed the right to marry, divorce, travel, etc., it does not mean that their social situation allows them to do so.  Many other factors come into consideration, including socioeconomic status, geographic location, family, religion, etc.  To assume that all Western women are so fortunate is ignorant, at best.

Later, Hirsi Ali talks about Western “solipsism.”  Referring to Western women, she says, “They are too busy hunting for the perfect prayer mat or pasta to give two hoots about a case of child-rape in Yemen.”  I find this statement incredibly offensive.  Although this statement may be true of part of the population, it is surely not representative of the entire Western population.  Also, I would argue that education about global politics and world affairs comes with privilege, which comes from access to alternative media sources, academic institutions, etc.  Unfortunately, topics such as rape in Yemen, or rape in any country, are not addressed by most mainstream news sources or academic courses.  I agree with Hirsi Ali that this lack of knowledge and awareness is a serious problem, but I cannot see the benefit of making such statements; instead, we should focus our efforts on education and raising awareness.

Also, the problems taking place in the East are not confined to the borders of any specific country.  “Child-rape” is happening all around the world, including Western countries.  There are countless individuals and organizations that advocate for women’s rights globally, raise awareness about gender inequality, and work to improve the lives of women everywhere.  Hirsi Ali’s description of Westerners is nothing more than a trivializing generalization.

For a brief moment in the article, I feel a shred of hope.  Hirsi Ali states that the West invading the East in order to emancipate the women is not “realistic or desirable.”  For once, I agree with something she says.  However, she immediately loses any brownie points she had won by making this argument as her closing statement: “For the dream of liberation to come true for women in the East it is imperative that we seek to shatter the underpinnings of their subjugation, which are now enshrined in religion and custom.”  Here, she implies that all women in the East long for “liberation.”  As the article suggests, Hirsi Ali’s definition of liberation would need to follow the model of Western feminism in order to successfully “dismantle the cages” of women’s oppression in the East.  Another problem here is that she points the blame to religion and custom, yet offers no justification for such a serious remark.  She believes that “militant Islam” is the root of the problem and the West needs to “confront it, or it’s only going to get bigger.”  One suggestion she offers for this is abolishing all Muslim schools in the West.  Hirsi Ali is really missing the point.  Islam is not synonymous with women’s oppression; this oppression comes from patriarchy and a misinterpretation of religious texts.  There is no one way to read the Qu’Ran.  Today, there are many interpretations available which offer unique perspectives on how the text can be applied today.  For example, Amina Wadud wrote her interpretation in a book called, Qur’an and Woman: Rereading the Sacred Text from a Woman’s Perspective, which clarifies… the lack of gender bias, precedence, or prejudice in the essential language of the Qur’an.”

Hirsi Ali’s sweeping generalizations and misinterpretations about culture, in the East and West, reinforce dominant attitudes which support imperialism and Western superiority.  She opposes “radicalism”, yet attacks Islam with such extreme hatred that her own behavior can be seen as fundamentalist.  Overall, I found Hirsi Ali’s piece offensive and culturally-insensitive.  I recognize the need for productive dialogue, but feel that this cannot happen until we chain the dominant framework with which we discuss issues of feminism, multiculturalism, and religions.  Making assumptions and generalizations about such a diverse group of people will not help anyone.   Rather than pointing blame or adopting positions in a hierarchy, we need to create space for women to share their experiences and voice their concerns.  Many critics of Islam argue that Muslim women are being silenced and oppressed, so why don’t we stop and listen to what the women have to say?