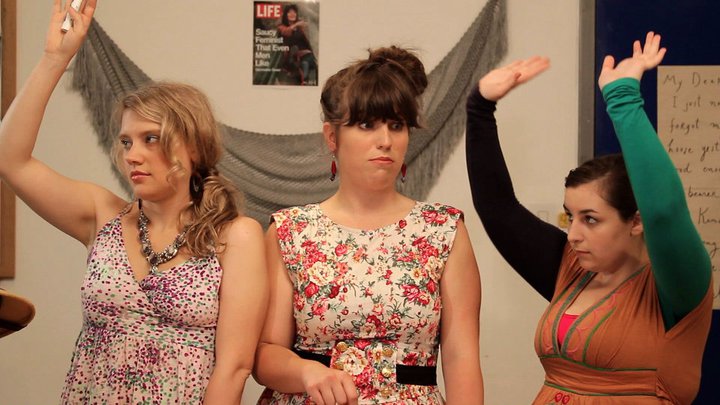 Vag Magazine is not your grandma’s feminist magazine, though we support her as a woman. Join founders Fennel, Sylvie, and Bethany, staffers Heavy Flo (a hero on the roller derby circuit), Reba (truly a legend of gonzo feminist pop culture journalism), and Meghan (the lone holdover from fashion magazine Gemma, which the Vag founders bought out with the proceeds from their Etsy shop), as well as enthusiastic intern Kit as they teach you how to be a better woman. In the second episode “Reject All American” (all episodes are named after seminal feminist albums), Bethany meets with menstrual cup company The Keeper about sponsoring the first issue of Vag, Kit learns the ropes, and Meghan tries to pitch a skirt story. New episodes will be posted each Monday.

Vag Magazine was created and written by Caitlin Tegart (The Pretty Good Sports Show, The Edge With Jake Sasseville) and Leila Cohan-Miccio (UCB’s This Is About Smith). The series is produced by Nicole Shabtai and directed by Zach Neumeyer.

Early praise for Vag Magazine:
“An excellent new web series…Get excited about this one.” – Adam Frucci, Splitsider.com
“A new Web comedy series plays Etsy-loving, patriarchy-hating third-wavers for laughs — and it works! We feminists have a reputation for being humorless killjoys with an inability to laugh at ourselves. Let me state for the record, however, that I laughed — and hard — when I saw the previews for a new Web comedy series that pokes fun at third-wave feminist hipsters like myself.” – Tracy Clark-Flory, Salon.com
“Vag Magazine made me think about feminism even as it parodies some aspects of it–and that makes it smart and funny.” – Kathleen Richter, Ms. Magazine
“The actresses seem written for their roles.” – Ricardo Bilton, New York Observer
“The events and people depicted in the series — coming from someone who has witnessed these firsthand — are at once completely absurd and entirely authentic.” – Alex Alvernaz, FishbowlNY/Mediabistro.com
“The series definitely delivers in the LOL department. Many of the plotlines and comedic tools are patently ridiculous, and they are endearing and authentic.” – Grace Chu, AfterEllen.com
“Love it.” – Jessica Wakeman, TheFrisky.com

Leila and Caitlin are available for interviews, as are members of the cast. For even more information, check out www.vagmagazine.tv or follow us on Twitter at @VagMagazine.