/ meredith / Comments Off on F-WORD: FEMINISM, FUNNY & FEARLESS! A Fundraiser for Paradigm Shift 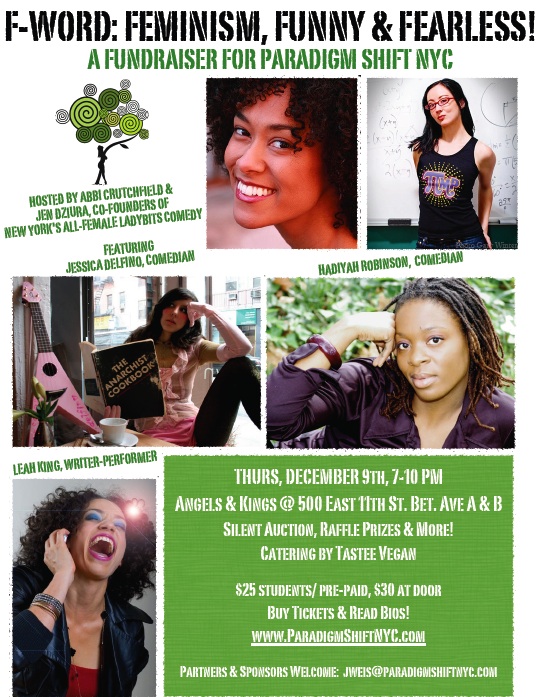 Featured in TONY’s “This Week In NY”! Our 9th feature!

LEAH KING, WRITER-PERFORMER “HEY, YOU. CAN I GET A SMILE?”
Known in the Burlesque world as LadyLUXXX, her one-woman show about street harassment fuses music, dance, and spoken word.

HADIYAH ROBINSON, COMEDIAN
Finalist in the NBC Stand-Up For Diversity
Performances on BET’s “Comic View” and “One Mic Stand”

If you can’t make it, please donate- we need your support!
Donations are secure using Pay Pal

JENNIFER DZIURA, CO-FOUNDER LADYBITS COMEDY
Jennifer Dziura is a New York-based comedian, blogger, and quizmistress best known for orchestrating the Williamsburg Spelling Bee, the nation’s most popular adult spelling bee, as featured in the New York Times. As a standup comic, she has performed at clubs and colleges nationwide and for the troops in the Middle East, Persian Gulf, and Africa. She writes quizzes and games, hosts math, trivia, vocabulary, and geography competitions for adults, and has produced over 100 shows at venues from Ivy League clubhouses to the famed rock club CBGB’s. She recently appeared in a Sci Fi Channel pilot for the television show Brain Trust, was filmed as an “expert” for a VH-1 reality dating show, has been heard numerous times on NPR, has contributed to five books including “The Idiot’s Guide to Jokes,” and was once unceremoniously cut from The Tyra Banks Show. Her one-woman show is entitled What Philosophy Majors Do After College.

JESSICA DELFINO, MUSICIAN & COMEDIAN
A critically acclaimed musician whose songs boast a ribald, comedic slant. She has performed at festivals worldwide and her polarizing work has both been publicly denounced by the US Catholic League. “A comedy rock star”- ComedyCentral.com, a Village Voice “best of”, “stellar” by the NY Times. The Onion opined that she was a cross between “Redd Foxx and Jewel” Her songs, “My Pussy Is Magic” and “I Wanna Be Famous” experienced cel-web-rity status. “Fetchingly filthy. . . . Some of the most nasty, offensive, and genius comedy you’ll see all year.” —New York Blade

LEAH KING, WRITER-PERFORMER “HEY, YOU. CAN I GET A SMILE?”
Leah King is a multidisciplinary performance artist and youth educator based in Brooklyn, NY, whose work focuses on women’s empowerment, afro-diasporic arts and multicultural identity. As a singer and dancer, Leah has performed with Brown Girls Burlesque, Black Rock Coalition Orchestra and Marc Jacobs, and been featured at Bowery Poetry Club, Whitney Museum, BAM, B.B. King’s, Le Poisson Rouge, Santos and Galapagos. She has led arts workshops at Rikers Island, Manhattan JCC, Grassroots Media Coalition and numerous educational institutions, and is currently touring her one-woman show about street harassment and sexuality, ‘Can I Get a Smile?’.

HADIYAH ROBINSON, STAND UP COMEDIAN
Hadiyah was a Finalist in the NBC Stand Up For Diversity showcase, a Semi Finalist in the Ladies of Laughter competition and a featured comedian in the New York Underground Comedy Festival. Hadiyah made her television debut on BET’s Comic View and returned for BET’s One Mic Stand. She has also been a commentator on MTV’s Yo Momma, and BET’s Do’s and Don’ts of the Hip Hop Awards. She has appeared on Sirius Satellite on Jamie Foxx’s Fox Hole Radio, NYC’s 98.7 Kiss FM Crank Squad and the online radio talk show Urban Hang Suite. Hadiyah is creator, writer and producer of the upcoming web series, “The Grind” as well as writer on the upcoming sketch comedy series “The Jump Off.”