/ Shae / Comments Off on Women & Religious Equality with Leora Tanenbaum

A portion of the proceeds donated to Women’s Alliance for Theology, Ethics and Ritual (WATER) a feminist interfaith organization

When: Wednesday, April 1, 2009
Time: 7:00 PM
Where: In the heart of the Feminist District
People Lounge, 163 Allen Street, NYC
(Between Stanton and Rivington, F or V Train to 2nd Ave)
HopStop.com Directions 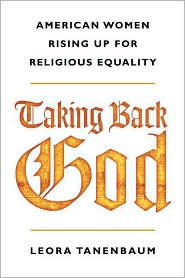 “Religious feminism is not dead! If you believe in gender equality and belong to any of the three great ‘religions of the Book,’ Taking Back God will both energize and anger you. As an observant Jew herself, Leora Tanenbaum carefully nuances the secondary status of many women in Judaism, Christianity, and Islam. She shows how women are challenging repressive traditions in light of the core values of their faith. As a Christian feminist myself, I especially appreciated learning and Jewish and Muslim women in parallel circumstances and with similar interpretive hurdles. Tanenbaum blends extensive research with human interest stories and an embracing attitude that keeps one turning the pages.”
—Reta Halteman Finger, assistant professor of New Testament, Messiah College, and former editor of the Christian feminist magazine Daughters of Sarah

http://www.takingbackgod.com/bio.htm
Leora Tanenbaum is the author of Taking Back God: American Women Rising Up for Religious Equality (Farrar, Straus & Giroux). It exposes the fact that millions of American Christian, Jewish, and Muslim women love their religion but are deeply troubled over their inferior status as women within their faith.
Leora’s previous books are Catfight: Rivalries Among Women: From Diets to Dating, From the Boardroom to the Delivery Room, about the ways in which women often try to sabotage one another, and Slut! Growing Up Female With a Bad Reputation, about girls labeled “sluts” by their peers (both HarperPerennial).

Internationally, her books are available in Germany, Turkey, Australia/New Zealand, and Greece.

In addition to books, Leora has written for Newsday, Seventeen, Ms., and The Nation, among many other publications. She has been featured in Redbook, The Washington Post, and The Forward, among many publications. She is quoted regularly in newspapers such as The New York Times, L.A. Times, Chicago Tribune, and USA Today and in magazines ranging from CosmoGirl to Child. She is a member of the Editorial Advisory Board of the Feminist Press.

Leora lectures widely at venues including the Commonwealth Club in San Francisco, Makor at the 92nd Street Y in New York City, and campuses such as Stanford, Columbia, Duke, University of Michigan-Ann Arbor, and Spelman College.

Leora regularly discusses girls’ and women’s issues on TV news and entertainment shows. She has appeared on Oprah, The Today Show, Inside Edition, The O’Reilly Factor, Politically Incorrect, and other programs. She is also proud to have been lampooned onCNN’s Capitol Gang.

Leora lives in New York City with her husband and two sons. She enjoys leyning (chanting the words of the Torah in synagogue), listening to the Beatles, and being unspeakably silly with her children.

ABOUT WATER:
http://www.his.com/~mhunt/
The Women’s Alliance for Theology, Ethics and Ritual (WATER) began in 1983 in response to the need for theological, ethical, and liturgical development for and by women.